I started this post with a rant about 2018 resolutions, talking about success and failure and goals for this blog going forward and blah blah blah, but then decided nobody actually wants to read that. So here it is– I’m planning on posting here more frequently, mostly about sewing/making things, sometimes about books or movies or TV or whatever I feel like talking about. So today, let’s talk about my Christmas dress and a few other random holiday things.

I’ve been wanting to try Colette Patterns’ Moneta Dress for a while now, since it’s one of my favorite styles to wear and the no darts/closures aspect is appealing. I ordered 3.5 yards of wine colored stretch velvet from fabric.com, which is soft and silky, though maybe not quite as stretchy as I would have preferred.

My measurements were between two sizes, so I decided to size up since I didn’t want the dress to be too snug. I made quite a few alterations to the pattern, shortening the waist by 1″ and self-drafting a half circle skirt since gathering velvet sounded nightmarish. Cutting the velvet was awful, I’m not going to lie– it’s so slick and heavy, it kept falling off the table, and keeping the layers folded together was a task that took longer than the sewing itself.

Now I’ve sewn with velvet before and was well aware of the nap. While cutting the pieces, I was very careful to make sure the nap was going in the same direction on all the pieces…sadly, that direction was upside down. So instead of being a rich wine color, it’s a dark, nubby burgundy, and while I spent a lot of time being pretty upset about it with myself, I got over it. Sorta.

Anyways, I’m mostly satisfied with how it turned out. I’d use the pattern and fabric again, and while I did use a serger for the inside seams (a total must– I would never attempt stretch velvet without a serger) I wish I’d used a coverstitch machine for the hems. And I’ll be extra careful about the nap!

Would use this fabric again? Yes, with extra care 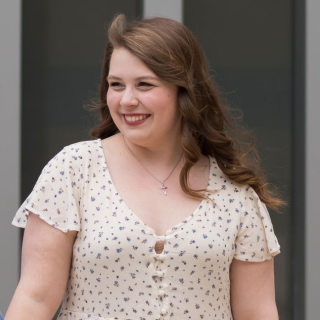 I am so SO excited to be launching my own longarm quilting service this fall, @autumnmoonquilting ! ✨🌙 sign up for the email waitlist (link in profile!) to be notified as soon as Autumn Moon Quilting opens for business to take in your quilt tops and finish them off with professional digital longarm quilting, both for local pickup in SE Michigan AND mail in from all over the US! 🥳 it’s been a lifelong dream to open my own studio in the creative industry I love, and I can’t wait to show you what’s next! #autumnmoonquilting #longarmquilting #longarmquilter #quiltersofinstagram #handiquilter
✨2 years already ✨ since our flowers-in-hair, pizza truck dance party of a wedding and even tho we’re rolling into 11 total years together, I still feel like the high school girl who’s boyfriend is off to summer camp 🥲 (ie, job travel for his amazing new engineering job.) photo by the ceaselessly amazing @melaniereyesphotography #anniversary
Been working on these @mypapercrane scrappy Halloween economy blocks for a few months now, and it is finally socially acceptable to share them 🍁🎃 #heidikenneyfabric #sew #quilt #scrappyquilt #quiltersofinstagram
A little golden hour snap of my latest obsession, a jewel tone pull for a commission quilt (the buyer has zero preferences on color or pattern, so fingers crossed she loves this! 🦋) The backing will be this amazing cotton sateen by @missmelodymiller 🌸 #quiltersofinstagram #quilt #rubystarsociety #fabric #fabricstash

The Sweet Stocking is Here!

Wedding Details (and How We Did it On a Budget!)